My Mom and Marty are here. They brought with them tons and tons of my “stuff”.

My Belt Story by Beth Roe
I ‘m a belt. I’m an elastic belt and I have blue and red letters that say jeans. I’m very important, because I belong to the girl named Vicki on Love Boat. It doesn’t feel good being a belt. You get pulled and stretched. That’s my belt story.

My teacher wrote “Very Good” at the top. Really? Nothing more? I am sure no one else has EVER quite captured the life of a belt so brilliantly.

So it must be time for school. A new planner, new pens and a new sticker!

I think I am ready. No, I am not. It isn’t just about starting to work again…in some respects the schedule is nice and something to do keeps me off the street and off the drugs 😉 BUT and it is a big BUT I am not ready to deal with the emotional roller coaster that is my job. That is what is filling my belly with butterflies. The people who get mad at me because they need someone to be mad at, the complaining, the whining, the dishing, the bitching, and the feeling that people are talking about you or something involving you when you enter a room because they all get silent as you walk through the door. UGH!
BUT and it is a smaller but maybe it will be different this year. Just maybe.

P.S This is my tarot card for today…
Tuesday, August 26
The ChariotThe Chariot
The Chariot is the representation of victory and a reminder that, through dedication and perseverance, great obstacles can be overcome. This card indicates that you are in control of your destiny and that your will is strong. Your refusal to surrender is your great attribute at this time. You will soon find yourself in a difficult situation that requires you to be in complete control of your actions and confident in your abilities.

Here I am with only 3 days until my reality comes and smacks me on the face again. Back to budgeting time-days and hours…back to schedules and short days. So today we did NOTHING! It was awesome. The kids wrecked the house and I didn’t care-I didn’t even make them pick it up. We were in and out all day. In the sun, back in for food, back out for lazing on the blanket, back in for drinks. Here is Molly around 1:00 p.m. She slept there for about an hour plus. So sweet.

This is what we ate A LOT of today. Perfect.

And then after an amazing run-seriously so good, I love runs like that, we all cleaned up and packed up for a gathering with a bunch of friends. And ate, drank, and played for many hours. So good.

Like I needed THAT! But last night Steve and I joined Facebook. The ridiculous-ness of it all is that at 8:30 we were both tired and at 10:00 we were both giggling like maniacs at who had the most friends at that point. Why did I just admit that to you all? And now I can not stop looking at applications and all those friends from High School who, I wonder, if they really still remember me. But really—-you want to be my friend??? 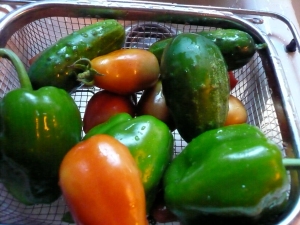 Found all these waiting for us this morning. Along with tomato monsters-UGH!

On the go here in Maine. After the wedding on Saturday, we packed everyone up on Monday morning and headed north to New Hampshire for a little summertime, Storyland, F-U-N!
PBS plays flashes of Storyland park as commercials during kid programming and my kids FREAK out every time it is on. When they found out we were going—there were even bigger freak-outs as the anticipation mounted. Truly the best part of the trip for Molly was ALLLLL of Storyland. There is nothing better then the pure bliss of a child.

The first day after a couple hours of the park, we went back to the Hotel, ate dinner and dove into the indoor water park. Ella’s triumph was conquering huge fears and going down the three story waterslide. After her first accomplishment-she must have gone down the slide 50 times. Up and down…over and over. Each time a HUGE smile crossed her face when she came up on the water surface. Eventually, both of the kids asked if they could go to bed now. Have to love that…

The next day we had more waterpark fun and then off to Storyland again. 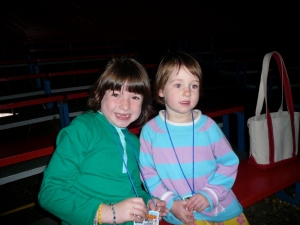 We drove over to Moultonborough to visit the Chapmans after a few hours at the park. Good to see them in all their business of life. Always something cooking over there on Bean Road.

We drove in to our driveway Tuesday night and got two very sleepy girls into bed. Good way to celebrate the end of summer for this family.

Or at least Merissa and I like to think so. Steve and I went to a wedding last night of an old roommate of his. It was at the Wentworth-By-The-Sea Country Club. Gorgeous setting with the back drop of pretentiousness and an air of “we just want to constantly remind you that you don’t REALLY belong here”. The highlight for me was meeting the wife of an old friend of Steve’s.

His friend, very nice, but his wife…Hilarious. Along with cracking me up about life as a wife, mother, motherhood, and working-it was a constant string of “I will never be that woman who…..” Who….has an amazing flower garden, has brie in the fridge to serve drop in guests, who can wear a clingy dress with a thong, and on and on and on….

And then we saw the woman who was an identical twin to Jodie Foster…PROBABLY her twin sister. As we began to examine things closer we realized that we were surrounded by famous people stunt doubles, Jay Leno, Dana DeLaney and this gorgeous woman, who walked out of the tent with such an air and her pretty boyfriend that we figured she was probably famous. This got Merissa telling me about all the real famous people she has met…One being Bernie Mac-rest in peace.

She was at a hotel in Atlanta waiting for an elevator and when the door open she just registered this Big Black guy in a Tuorgoise Suit but then it was BERNIE MAC. She stood there frozen-“You’re Bernie Mac!” And she said he just looked at her, smiled, held out his arms and said “Come on in Baby!” I love that story. I would have liked to have that be my famous person meeting story. It made me realize I have not one good famous person meeting story. So I will have to work on that.

The rest of the night was a whirl of small talk and laughter until Steve and I snuck away to get a small pizza to share with a beer before heading home. So not really an A-List wedding, but definitely an A+ night.
Our friends twins…breathtaking cuteness. Even cuter in persons.

And what are these? I want some in my yard…

Ella has loved her week at Strawberry Banke Camp. Everyday they start out by walking over to one of the houses in the Park to read a picture book from that era or relevance. Today they read a story about a Slave on the Underground Railroad. It got Ella thinking and chatting the whole way home. She was making all sorts of connections and declarations about the state of things in this world. We covered everything from the Civil War to Martin Luther King to Santa Claus. You are curious about that last one.

As we were finishing up our conversation with the idea of not hating people because of their skin color and what a great man Martin Luther King was, she declared-“It is good to DO things in this World to make it Better!” I replied that she certainly had it all figured out. “I know a lot of good things, Mama and I bet Santa Claus was really happy to hear me say that!”

I know he was. 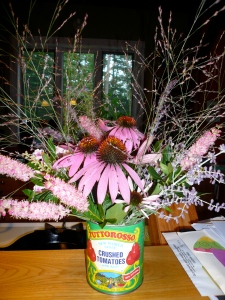 This gorgeous bouquet came from Meg last night. She grew them all. I wish I had a flower garden that produced lovelies like that.

Quote of the day-Ella and Molly were wrestling on the bed today and Molly sat down on Ella and said…
“You can’t move. I have a powerful bummy.” Ella and I pretty much dissolved in laughter.

My dahling sister is walking in the Alzheimer’s Memory Walk. Make a donation to this worthy cause and support my awesome sibling who is doing something great! Click this LINK

That’s it-back to watching Across the Universe. Verdict is still out on this movie…leading man…so dreamy.

Ella had her first day of camp at Strawberry Banke today. After tears and fears, she walked through the door and a lovely little girl named Isabella walked up to her, asked her why she was crying, and told her she would be her friend this week. I could have hugged her. I went off to the gym, errands, and time alone. Glorious…

After lunch the girls and I ran to the post office to pick up a package and it was MY PLACEMATS!!! YEAH!!!! All the way from Australia. Yeehaw…They are lovely and the woman who made them and sent them…I can tell a kindred spirit. Steve read her note and said—“you guys would get a long.” Here they are in use tonight… 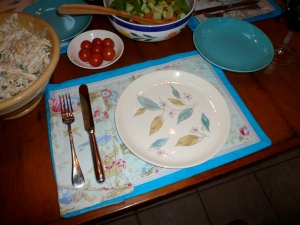 We had the Lamberts over for dinner tonight so it was a perfect opportunity to break them in. I made a yummy dinner tonight. HIGHLY recommend this for an easy-yet delicious entertaining dish. Lemony-Ricotta pasta with Basil from The Kitchen. Literally took the amount of time it takes to make the pasta and so amazing. Fresh ricotta from Terra Cotta Pasta and Served it up with some Fugasse (sp?) bread from Beach Pea Bakery in Kittery and salad with veggies from the farm and basil from our yard. We finished it up with Gingerbread with Blueberries and homemade whip cream….ahhhhh.

Here are the kids eating their dessert…

After dinner-the boys took the kids in to play Wii while Meg and I got to chat and chat and chat. I loved it. Sewing, books, kids, and school, and life…ahhh being a grownup around other grownups is so much fun. Also looking forward to a grown-up only trip to Mimmos in York next Wednesday with them. BEST SUMMER EVER!-right Colleen?? Seriously—it is.

Life in a Barn in the Woods
Blog at WordPress.com.